Google recently announced it is rolling out a new core update, the December 2020 core update. Normally, the search engine company releases core updates after very three to four months. But due to the pandemic they have released this update after almost six months – the last update was released on May 4, 2020, taking a lot longer than the previous updates to roll.

Just like the core algorithm update in May 2020, this update has also raised frustrations and confusions in the digital marketing arena, especially among people doing SEO. At the same time, a lot of businesses, news sites and forums are also confused about the effects of the core update.

Here is the Tweet itself in its flesh stating

“later today, we are releasing a broad core algorithm update, as we do several times per year. It is called the December 2020 Core Update.”

The December 2020 Core Update is now rolling out live. As is typical with these updates, it will typically take about one to two weeks to fully roll out.

Google said on December 3rd that is releasing a broad core algorithm update like we do many times per year. They said, it is called the December 2020 Core Update.

Since the update has released just before a few weeks before the holiday season, a lot of concerns have been raised about its timing. With the present Coronavirus outbreak and safety concerns, several people are planning to shop online for this holiday season. But for all businesses planning to make the most of this opportunity, the update can be devastating.

Just a couple of hours after breaking the news, Google started the roll out at about 1 pm ET on December 3, 2020. Google said on twitter “the December 2020 Core Update is now rolling out live. As is typical with these updates, it will typically take about one to two weeks to fully roll out.”

They spokesman from Google said that “It only took us two us only two weeks to fully roll out the last update we released in May 2020, however people started experiencing changes in just a few hours. Officially the may core update started on May 4th and ended on May 18th, which are complete two weeks. Just like we said, a lot of people starting noticing changes in just a few days. So, everyone should keep an eye on it”.

What We Have Come To Know So Far?

It is just a few days back since Google has released their third Core update of the year, so it is too early to see their full impact.

What Google Seems To Be Prioritizing In The Update?

What Business Should Be Focusing On After This Core Update Roll Out?

Google has issued recommendations about what to consider if a core update has adversely affected you in the past. Though there are no clear actions that the company has advised people to follow, however they have offered a list of questions to consider in case your site is hit by a core update. These set of questions allow business owners to learn more about the impact of the Core update on their site and take necessary actions to mitigate the negatives effects on their ranking.

Why Your Businesses Should Care About Google December 2020 Core Update?

Anytime Google changes its search ranking algorithms, it does affect several websites. This means your website can go up or down in the search results. It is important to know when Google makes these changes as this gives your business a fair time to understand whether you have changed something on your website or if Google has changed something in its ranking algorithm. And now that you know that Google has released its core ranking update, it will be sensible to keep an eye on your analytics and ranking. 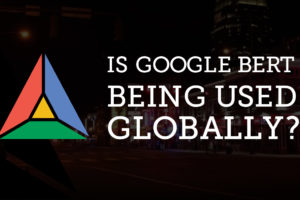 IS GOOGLE BERT BEING USED GLOBALLY?